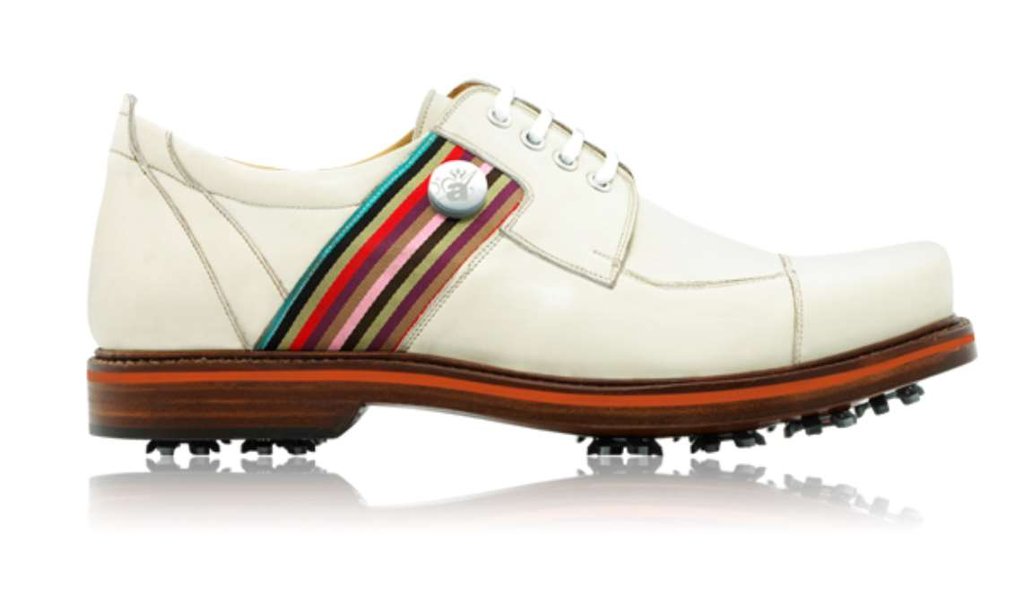 Alex Bartholomew embarked on a mission to build the best golf shoe. We examine the results.

When it comes to the game of golf, nearly every purchase is a highly personal one. Still, some products are more personal than others and golf shoes top the list as some of the most important performance gear in the game. They’re also perhaps the most noticeable part of a golfer’s attire, round to round, whether you’re the wearer (are they painful? comfortable? stylish?) or an envious (or critical) member of a foursome.

Alex Bartholomew realized as much when in 2008 she set out to build Royal Albartross, a European company she organized to craft the best golf shoes in the world. By hand. Employing talent in Italy.

In a market dominated by the likes of FootJoy, Nike, Adidas, and many others large and small, Bartholomew’s story starts with odds of success that make David’s battle against Goliath appear like a safe bet. The young entrepreneur says she knew immediately that her goal presented a very tall order.

“Everyone who plays golf requires golf shoes and many major companies have a long list of footwear product lines,” she acknowledges. “Yet history is full of stories about individuals and organizations outside a particular industry that wind up finding success–or even triggering an entirely new way of thinking–in even the most competitive business areas.”

After reviewing as much of the international golf footwear market as humanly possible, Bartholomew quickly realized that while the golf industry is extraordinarily competitive, it is fundamentally underserving categories that are key drivers in the high-end fashion market.

“Having studied the golf market comprehensively and having evaluated the kinds of quality that I am attracted to both on and off the golf course, committing to planting a flag in the fine-arts, handsewn-footwear market was a challenge I wanted to embrace.” says Bartholomew.

So how does she and all who make up her Royal Albartross company fare on the narrow path to success as a creator of golf footwear? Let us walk you through our experience.

After a thorough review of the Albartross website, which we consider an adequate reflection of a brand with a design emphasis, we decided to order the Black Jack Nero Patent (Calf Leather) shoe. The decision was mainly based on what we felt would be a challenging product to craft and generally representative of the company’s focus on detail.

We wouldn’t be totally honest if we didn’t say the first line of the shoe’s description had something to do with our choice: “When you pull off a great shot – just like being dealt a great hand – life suddenly has meaning.” That’s not a bad line, after all. It suggests experience with the game (well two, actually) and an attitude that feels missing in mainstream brands.

While I expected to wait months to receive the shoes, they arrived in a matter of just a few days. Royal Albartross golf shoes are handmade (so it can take months to make a single pair), but it does craft some models and common sizes in advance to build inventory and to create convenience for customers who require rapid delivery. My selected model and size, thankfully, were among those already prepared and waiting for an appreciative customer.

It’s worth noting before moving on, that when a company promotes design as a significant strength, which Royal Albartross does, I feel compelled to look at all sides of its product under a microscope. I look at not just when a product arrives, for example, but how. The packaging, the included extras or accessories, and so on–while just the start of the process–really do say a lot.

Royal Albartross excels from the moment I open the package. The shoebox itself features a textured print that appears like an alligator skin. Inside, along with extra spikes and spike wrench, the shoes are blanketed in a soft cloth bag. The packaging is prepared as one might expect an expensive watch would be. Solid presentation for sure. A great warm up for the headline act, which, removed from their inner sheath, are the picture of quality, style, and attention to detail.

The shoes have a solid form but feature a soft, fine-cut leather. The lace eyelets are made from stainless steel. The lace tips themselves are polished. The detail pattern-work of the fabric side strips is meticulous, yet tough. A ballmarker which features the Albartross logo and sticks to a magnet sewn into the right shoe adds a nice touch (though I will complain about this later).

All in all, even before the first fitting, the Black Jacks are a hit.

Anyone who has ordered shoes online knows the process to be a gamble unto itself. (It’s one of the mysteries of life how two pairs of the “same size” can fit so differently.) My pair of U.S. size 10s, however, fit perfectly. Not only that–they were comfortable from the start.

I expected a significant break-in period–serious discomfort for at least a few rounds–but these shoes never rubbed me the wrong way. I can’t speak to all models, but the Black Jacks featured ample room in the toes, adequate yet minimalist heel padding, and extremely flexible, thin-leather tongue that makes slipping them on and off a snap.

Look great, feel great…But what about function? In a word, Royal Albartross shoes are “superb.”

Pretty much every footwear brand refers to the importance of a stable base. Royal Albartross’s Black Jacks feature the most rigid, stable foundation of any golf shoe I’ve ever worn. That’s literally a game-changing feature for me, since I have a tendency to slide forward slightly during my downswing. These shoes offer a simple solution: Their super-solid base simply don’t allow me to slide. Problem solved.

I’ll admit that during the first few rounds of use I was concerned that sliding might cause me to roll my foot enough to altogether flip the base onto its side. That has never happened to me, but it’s worth warning that a more severe, exaggerated slide could potentially expose one’s ankle to injury. (Update: Now having worn the shoes for roughly 40 rounds, I consider such an occasion unlikely and more the fault of a radical swing flaw than the shoe).

I have spent a significant amount of time with Royal Albartross’s spiked Black Jack shoes. I don’t wear them all the time–partly because I occasionally like to play a spikeless shoe I can comfortably wear before or after a round (the company introduced spikeless shoes not long after this review was first published) and also because they’re shoes I want to own for a long, long time.

Don’t get me wrong–these are tough shoes. There are very few signs of deterioration on mine despite my having worn them during extended periods of rain, heat, and even ice. I don’t put much time into after-care either. I’ll apply some leather softener when motivated, give them a bit of polish, and they return to looking good as new. (I’ve never even needed to change my spikes.)

My only complaint, and it’s a weak one, has to do with the ball marker/magnet attachment I mentioned earlier. Good or bad, many of us golfers are in the habit of knocking our shoes together after a round to free those pesky layers of sod we’ve amassed underfoot. If you’re a member of that club, you will almost certainly leave your ball marker with the other rubble littering a nearby club’s parking lot. That’s a minor knock on an otherwise outstanding product that looks great, feels great, and does both while encouraging good golf form. (Besides who is really to blame: You or the shoe?)

For those of you who can afford a premium product at a premium price I highly recommend Royal Albartross footwear and applaud creator Alex Bartholomew’s fearlessness for pursuing her vision and seeing it through to share it with us.

The Black Jack Nero model referenced in this story is part of the Royal Albartoss Collector’s Range. Est. $595.

Follow...
Sean T. Kelly
Owner/Director at LinkedGolfers
Sean T. Kelly is a writer, editor, and content director who has nearly 25 years' experience developing material in print, online, and over the air. His work has appeared on the New York Times "Best Seller List," international magazine covers, and the Today Show, among others. Sean is currently focusing on the intersection of travel, lifestyle, and mobile technologies. He is the owner/director LinkedGolfers.