Inside the World Hickory Open

A quick look at the 10th Anniversary World Hickory Open at Carnoustie Golf Links, a competition that celerates the rich history of the game of golf.

American hickory golfer Cliff Martin was the winner of the World Hickory Open’s Amateur Scratch title and also became the first recipient of the Archie Baird Trophy for the top amateur. “This trophy is a magnificent consolation for coming so close to winning the overall title,” said Cliff, who travelled from Los Angeles to compete in the World Hickory Open.

“This is my second year at this tournament and there will definitely be a third. I really enjoy the camaraderie between hickory golfers – and seeing just how much everyone loves playing with these crazy antique clubs.”

Jake Anema from Dereham Golf Club won the Amateur Handicap section, with Andrew Buchan from Muswell Hill and Maurus Joe Lauber from Davos being named winners of the Senior sections.

The ladies’ titles were won by two Swedish golfers: Christina Lindgren (Handicap) and Brita Nord (Scratch), who are both members of Bro Bålsta Golf Club, near Stockholm. “Other than winning alongside my friend and clubmate, the highlights of this year’s World Hickory Open have been the friendliness of everyone we’ve met and the superb golf courses,” said Christina.

With more than 120 hickory golfers from across the globe competing in this year’s World Hickory Open, founder and organizer Lionel Freedman revealed that the event had been ‘An astounding success’. 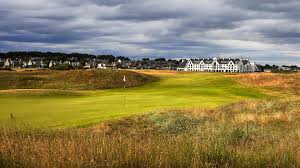 A look back to the Carnoustie Hotel from the Championship Course

“The Carnoustie Country courses we played on – Carnoustie Championship and Buddon Links – were outstanding,” continued Lionel. “Every single player was so appreciative of the experience of playing hickory golf on one of the world’s greatest golf courses and its first-class neighbour,” said Lionel, who added that the World Hickory Open will be returning to Carnoustie Country in 2016.

“Carnoustie Country has a fantastic choice of traditional links courses which are ideal for hickory golf and the facilities, hospitality and accommodation help to make this the perfect area for our tournament. Congratulations to all this year’s winners, thanks to all our wonderful competitors and sponsors – and here’s to the World Hickory Open 2016!”

Follow...
Sean T. Kelly
Owner/Director at LinkedGolfers
Sean T. Kelly is a writer, editor, and content director who has nearly 25 years' experience developing material in print, online, and over the air. His work has appeared on the New York Times "Best Seller List," international magazine covers, and the Today Show, among others. Sean is currently focusing on the intersection of travel, lifestyle, and mobile technologies. He is the owner/director LinkedGolfers.